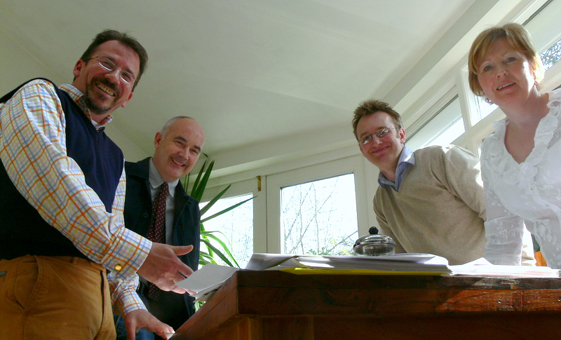 On many assignments we work as an integrated team, bringing each client fresh approaches, a wealth of practical "hands on" experience and vivacity.

The Animator and Fundraiser - Mark Ereira-Guyer established eg: consulting in 2006. He is a well known figure in the voluntary and community sector, having headed up an international development charity Action for Brazil's Children (ABC) Trust; he grew their income 15-fold in just a few years. Mark has previously managed Lloyds TSB Foundation's East of England annual regional grants programme and worked as a manager for rural community development specialists, Suffolk ACRE. He has well-developed project management skills.

Previously Mark served on the COVER (Community and Voluntary Forum: Eastern Region) Board representing the Suffolk’s VCS and on the Government’s East of England Regional Economic Forum. Mark has substantial local government experience built up over three decades, starting in 1995. In 2009 he was one of the first elected Green County Councillors in Suffolk, and was their Group leader until 2017. For several years he served on the LGA Community Wellbeing Board. He undertakes a wide range of other voluntary roles.

The Trust Specialist and Evaluator - James Baddeley has spent the past 17 years working as a consultant and in senior management positions for dynamic charities and social businesses, delivering growth and excellence in each. Allied to this he also spent three years as a regional committee member for the Big Lottery Fund, distributing grants of £10 million per year.

This charity sector experience is combined with earlier experience of commercial sales and marketing, a background which provides him with a strong understanding of the business principles needed for organisations to be successful and profitable - vital knowledge for charities in today’s climate.

2010 Promotional Flyer - what we offer

And Our First Client Feedback Report